Sunday was no walk in the park… probably because I stayed home all day… Most of the time was spent in the Den with an occasional outing up to the bedroom for short naps. So what was I feeling today? Tired, sore, and now that I wasn’t partaking in the scheduled pain-killer-tablet-taking ritual, I was in pain. Not “intolerable” pain but one where the side of my head felt really thick, Quasimodoish (except the hump was on my head), with ear throbbing and an “uncomfortableness” migrating away from the incision area that gradually increased over time. It was at those times that I took pain killers. the good news is that I’ve tapered off from taking 6 pills over a 24-hour period to taking only 3 pills. Other than that, I felt groggy, a little light headed but otherwise content!

Roxanne has been really great about making sure I’ve been doing OK; telling me to relax, asking if I needed anything, etc. It got to a point where I would intentionally get up and offer to help just to see her frown with lips pursed and hands on her hips, then pointing me in the direction of the den. I could “see” her firm, commanding, yet loving, words coming from her mouth, only there was no sound… all quite funny (at least to me). Around mid afternoon Roxanne left for her first riding lessons in quite some time. She’s been talking about riding horses for awhile and decided she wasn’t going to wait any longer (she rode dressage back in college). That’s what I love about her; she doesn’t talk about what she wants to do, she makes things happen.

Regarding my family and other animals, I mentioned in a previous blog that we got a 9-week old puppy two days before my surgery. Why? Good question. This sudden acquisition is not without precedent. Four years ago Roxanne and I got married and decided to do a lot of things at once. She and Ethan moved from Charleston, SC, we bought a house, moved in, blended families (four kids in four schools), and then one day, during a brief lull in painting, we were sitting down in the den and Roxanne said, “let’s get a puppy!” and this was the first month…

Fast forward to last week: Roxanne searches Craig’s List, sees a posting with a puppy picture and I knew then-and-there it was all a forgone conclusion. We drove up to Macon, Missouri (known to consistently top the list of the nation’s worst puppy mills) thinking we would go to the owner’s house. But no, they called our cell phone while en route and asked us to meet them at a “Casey’s” gas station for the hand-off. I thought it was all very shaky and I told Roxanne as much. Not that it did any good…

The couple arrived 45 minutes late and handed us the puppy – a flea-ridden puppy – and drove off. I’m not going to go into describing the whole bizarre exchange with language that may unfairly stereotype people or setting; suffice to say, we drove back to Columbia in silence. Once home, Roxanne took the puppy immediately upstairs where she and the kids proceeded to spend the next couple of hours bathing and defleaing as best they could (thank God). The following morning we took the puppy to the vet and all went well – all fleas dead, no worms, and vaccinations administered. The puppy’s name is “Luna” because of her now visible white coat and Blue Heeler merle pattern that could be likened to moon craters. she appears to be a smart dog too!

This morning Roxanne and I took our first outing since my surgery by walking the dogs in a nearby park. Another beautiful day! We didn’t spend too much time outside because, believe-it-or-not, that little walk really wore me out! 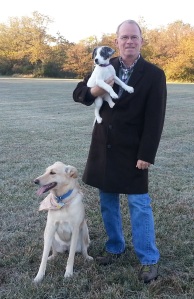 Me, Sadie and Luna posing at park

I’ve written about the surgery, how I felt so far with the recovery, but I haven’t really written about not being able to hear anything any more. Perhaps its because I haven’t been in a situation where I’ve really needed to hear a lot. Perhaps its because our family communicates via telepathy. One thing to note about going deaf is that it isn’t all quiet and peaceful inside my head! Aside from the ringing caused by tinnitus, I hear “phantom” sounds that often accompany actions such as turning on the water faucet. I “hear” water coming out of the faucet – even after the faucet is turned off! Likewise I “hear” wind when I see the trees sway and leaves rustle and “hear” a lawnmower when seeing someone mowing the lawn down the street. I’ve read that this isn’t uncommon!

“Hearing” is a very complex activity. So much of what we hear we get from non verbal cues: lip reading (speech reading), body language, context, etc. What we actually “hear” is only a portion of what our minds piece together in any given situation. I find I can read lips quite well and it has served me well in many a situation. If someone you know is hard of hearing or deaf consider doing the following (excerpt from Wikipedia):

Lip reading, also known as speechreading, is difficult because only 30% of the speech can be seen, the other 70% is inferred by context clues. Thus, there are little things that can be done to make the process a little easier. Learning to lip read is like learning to read a book. A novice lip reader will concentrate on each sound, and may miss the meaning. Lip reading will be more effective if you receive the message as a whole rather than each individual sound.

Lipreading is a skill that is easier to develop in those who have experience with spoken language. In one study by Tonya R.Bergeson adults who progressively became deaf, are able to read lips much better than those who suddenly became deaf.

Last night we continued to watch Lord of the Rings and only got as far as Rivendell where the “Fellowship of the Ring” was formed. Sheeesh, fitful nights coupled with wearing days make for poor movie watching!

6 thoughts on “My third day after surgery…”